A lot of people discuss and focus on individual action in reaction to political or social problems rather than wider changes. I mentioned this in my Marxism and Mental Health video.

Most of the time this is to distract people’s attention from a lack of action on the part of those with the most power. The Irish government’s mental health reform campaign #EndtheStigma focused on opening up to your friends and being more accepting of mental health conversations. This is a good idea but it conveniently does not include providing any additional health services. In a country where the health service website literally tells you to call Samaritans if you need urgent help because they don’t provide that.

But the attitude is especially prevalent in discussions of the environment. During the Californian drought people were told not to wash their cars, to take showers instead of baths and yet the overwhelming water use is by factories and large farms growing climate inappropriate crops not households.

Individual ethical decisions matter, of course they do, but powerful political change cannot be achieved individually. I have no problem with people trying to live in the way that seems least harmful to them, there is an arrogance in assuming that everyone else is just too lazy or too unwilling to change to participate in these more “ethical” ways of living.

Which is why I cannot take activists who pat themselves on the back for the ways that they have “opted out” of capitalism, society, or whatever seriously. Just because you can pick up your toys and leave doesn’t mean everyone can and it doesn’t solve any of the problems you left behind.

(Miriam over on her channel zentuoro made a great video on Environmental Racism and before any one accuses me of defending Monsanto and their friends, the problem with those agri-companies is unregulated, globalised corporatism not GMOs.)

But in particular, I’ve been finding faulting lately with the narrative of “self-sufficiency”. I sat in a library recently with a pile of books this high all claiming to help homes become energy self-sufficient or how to start off-the-grid homestead farms. My goal was to try and scale-down some ideas for a home rainwater-collection system. But the authors have no interest in being scaled-down to suit the majority they are only interested in the minority of people with a fair-trade hemp sack of disposal income. Even the “shoe-string budget” book called for investments of thousands of dollars. 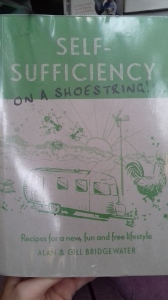 Not only that but they simultaneously call for removing yourself to the countryside while having no interest in the problems faced by people living and working in rural areas. One book went so far as to suggest that rural people would dislike “sophisticated people”

When I show this to a friend raised in rural farming she wasn’t surprised, she knew these people who moved to their custom farms or expensively restored farmhouses who lived behind tall gates and outside the rest of the community.

A self-sufficient narrative has no space for those who rely on the establishment of accessible infrastructure. People who need to stay close to medical services don’t get to live “off-the-grid”, people living pay-cheque to pay-cheque don’t get to invest in micro-generation power sources.

“Self-sufficiency” is the ultimate opt-out. I’m interested in supporting the farms that surround and feed our cities as well as convincing farmers to adopt less environmental damaging practices. I am not interested people who spent most of their lives having to wait less than ten minutes for a bus tell me how they’re saving the world by spending their savings on a solar-powered house and half a dozen chickens.